Ok, so this wasn’t actually all that recent, but it did happen when I was roughly at the stages of building that I am currently describing.

Before we get any further these are the results:

Who, Where and Why:

Colin Hartley, a mate of mine who runs a local Open Mic night and also the Lansdown practice rooms, asked me if I would record him and his Son playing at the Cheltenham Sound Music venue.

Having both done a sterling job performing at my brother’s wedding (basically pulling a second 2 hour set out of thin air and playing like men possessed on the basis of “They were having fun so didn’t want to stop”) I figured it would be a good excuse to dust the audio interface off and experiment with a bit of live recording whilst returning the favour.

I was also intent on evaluating the Cockos Reaper DAW, so I thought that this would be a good chance to try out some new things.

(some of) The Recording Details:

As it happens, the setup at the Sound Music Venue is pretty darned good for what we were hoping to do. They use a Mackie 1604-vlz3 to control the FOH and foldback. A quick search for the device in question revealed a useful schematic on page 34 of the owners manual. This confirmed that the device had 16 tracks, but also the ability to output 8 of them direct (post fader and desk EQ).

I broke out the jack wiring loom and routed the 8 direct outs from the desk to my Focusrite interface and requested that the engineer only use 8 tracks (not a problem for 2 musicians even with all their various guitars).

The Focusrite is a firewire interface so that linked back to a laptop running reaper.

We also added an SM58 on the final channel at the front of the stage pointing into the audience to get some of that live crowd sound. Normally the pros uses a bunch load of shotgun mics and mix that together, but I don’t have that kind of budget for those kind of toys, nor the inputs to spare (or a pre-mixer or whatever they do).

We did a couple of quick level checks to confirm that:

Finally I waited for the act to walk on stage, pressed record, and went to the bar.

The joy of this is that, because the direct outs are all post fader, the work was now squarely with the live sound engineer so I didn’t have to crowd his booth. Instead, I just popped by occasionally to make sure the laptop was still securely hidden in it’s cubbyhole and all beer was a safe distance from my toys.

The recording process meant I was left with 8 mono wavs each about 2 hours long.

Reaper made it easy to slice these at key points when the track changed. After a bit of confusion about what buttons I needed to press to make them persist themselves as actual wavs, I had a disk-full of many songs each with up to 8 mono tracks (even Colin would find it a challenge to play more than 3 instruments on one song, so only a few of these tracks were used for each song).

I added a reverb send and sent differing amounts of the tracks to it. The Audience mic actually captured some interesting ambience from the music hall, so I had to balance that with the direct sound. I tried using sideband compression to make that duck under the music, but in the end that was unnecessary because the overall mastering compressor took care of dropping the crowd noise when the music picks up.

I panned to a decent fit and, as 2 male vocals plus 2 of the same instrument is a bugger for muddling frequencies, I finally resorted to some stereo enhancement (delaying one side a fraction of a millisecond) to give Jay and Colin’s vocals & guitar each their own space.

On the master bus I used Voxengo Soniformer to shape the overall frequency characteristic and Image Line Maximus pull the levels up a tad, add the excitement of a soft clip and deal with the broader bass, mids and treble bands.

Areas for improvement include that the guitars ‘thump’ a bit which is something I’d normally try to fix at record time rather than in the mix, this is obviously not such an easy option with a live recording.

I’m sure I could fiddle with the result some more possibly to remove some of that ‘thump’ with Eq (along with the inevitable and boring job of squeezing MOAR LOWDNESS) but the above is what I parked it at before sending the stems and the rough mix back to Colin for him to play with further.

All in all a decent and fun experience. I’d love to hear your comments on the mix so please feel free to let me know any tips you have.

On the subject of Reaper, I think the evaluation went well and at that price I plan to purchase a licence once the studio is built. 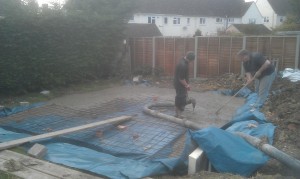 No matter what country you are in there will be laws about what you can build and where.

Because I am building this in the UK on part of the same plot as an existing house I can use certain building rights called permitted development. Please note that this post is just my take on the rules and that if you are in doubt you should go to your local planning office and ask for their advice, my experience was that they were very helpful.

The government planning portal site provides some quite useful interactive graphics on what is allowed for extensions and outbuildings.

I doubt when this was debated in the house of commons the MPs were thinking about music studios, so the precise rules I am using generally refer to outbuildings like sheds and summerhouses.

More details for outbuildings are available here. However the basics are that, since I’ve not covered 50% of my garden even with the studio, I am free to build an outbuilding. Further I am not subject to building regulations providing it is either less than 15 sq m  or between 15 and 30 sq m and made out of ‘substantially non-combustible materials’. The only exception to this is the electrics which I will have to get signed off.

I figure that bricks and concrete count as non-combustible, and my studio works out to be a tad under 28 sq m.

As it happens, the chap doing most of the structural work for me is helping me keep it to regulations anyway. There have been a few times that this has lead to less than ideal acoustics (the damn wood beam floor is basically a big resonant cavity) , but I think keeping the building inspectors happy is probably better than to risk having to tear it down. TBH, the building inspectors have been very approachable even offering some advice on the studio when they had come round to review some work I’d done extending the house.

I should add that there was a 3rd even more important party that needed to approve of what I was doing – Kate, my very patient wife.

I also get the feeling that the bass drum should get a mention as an inanimate ambassador in all of this. By not fitting through the loft hatch, he resolutely took up storage in what is going to be the downstairs bathroom, thus re-prioritising the studio.