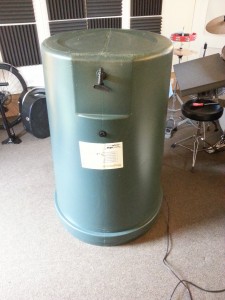 So, in yet another amusing miscalculation of scale when internet shopping, I bought 3 (three!) s0d-off enormous water butts to collect the rain run off from my studio.

When rolling them down the path to the studio I found their resonance to be pleasing so I managed to fit one through the door of the studio.

What you see in the picture above is one of said butts with an LDC set up underneath it and the lead popping out the fill hole.

I chose my trusty Rode NT-2A set to Omni mode and set about hitting it with sticks.

The initial results were not worth sharing, however after propping one side up on some acoustic foam it started to sound a bit better. I figure being a closed space was either killing the resonance or putting it too low to be useful. Behold the perfect propped butt: 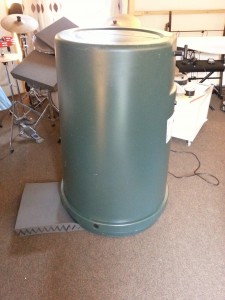 Searching about for the perfect implement I found most of them to have too much ‘whack’ in the resulting sound. Drumsticks were quickly discarded, an empty beer bottle showed some promise:

It was only when I took to hitting it with 2 slippers one on the side (soft end first) and one on the top (rubber sole first) that I got the combination of whack and body that I was after.

At this point I realised that there was some potential scope for pitching this down later so I switched to up to 88.2Khz. and recorded a few noises. BTW, these are free to download at soundcloud quality. I’d love to hear what you do with the samples. Please note I’m only granting you permission to use them in musical works and not permission to include them in sample or sound libraries, add-ons and instruments.

After a bit of messing about I made the following samples: