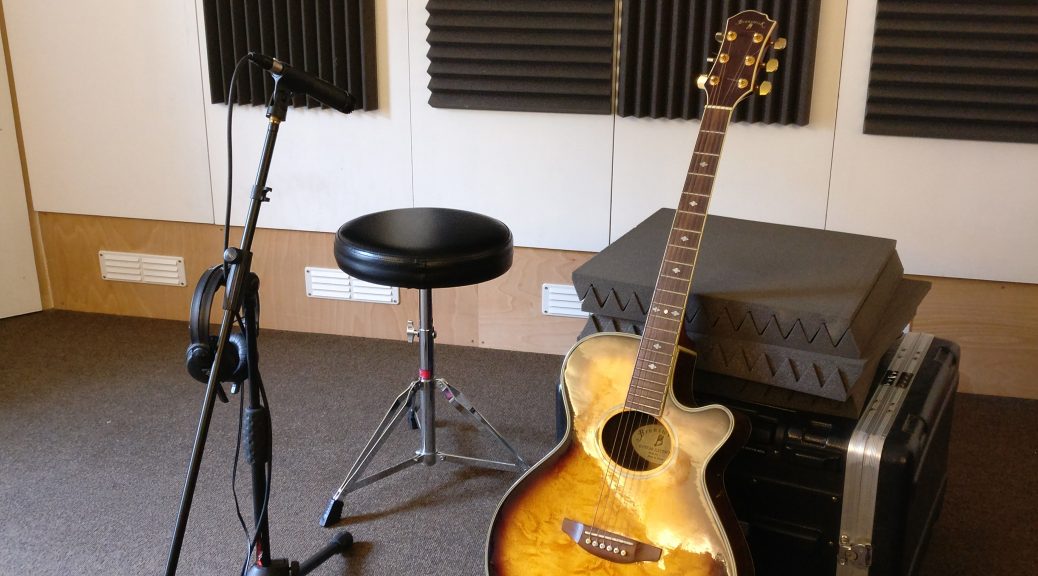 People often ask me how I go about producing a track. The truth is that there is no one formula or rigid process, however in order to capture those things that have worked for me I’m going to commit to writing a couple of logs of the process that has worked with me and Lloyd Jenkins, one of the customers of Enginehouse Studios. Lloyd has very kindly given me permission to share the details of one of his tracks including part-finished sketches.

Skip to the end! If you can’t wait, here’s the complete backing track:

In this post I’ll show you where I start and what decisions we made on one particular track – Primaluce.

The big thing in what we do here is collaboration, by bringing new ears and performers into the picture, you get fresh ideas and energy.

Lloyd, prolific songwriter that he is, knocked this up whilst on holiday and sent me this from his holiday villa in Italy:

The above is exactly what he sent me with a tad of compression just so the volume fits with the other items on this page.

This is where the collaboration began. On hearing this track I knew I wanted to work on it. I also knew it had to be gentle so I sat in the studio that evening and experimented with a few motifs.

All classic stuff and firmly in the key of E minor / G major which gives me a scale to play in. I took this and improvised, excerpts of which are below:

The Verse ideas didn’t really work, but there were a few notes in the chorus that really resonated with both Lloyd and myself.  We eventually ended up reducing the chorus motif to its essence and adding it back to the intro.

When we both had an available day, Lloyd came to the studio to record the main guitar parts. These would serve as the scaffold for the track and I could add ideas to them to see if they worked or not.

We also decided to gradually step the tempo up through each section of the song.  This was really the only way to make that beautiful subtle intro work with the Hey Jude-esque ending that the track pushed toward.

For the most part we double tracked the guitars and used the inbuilt mic as this gives a quite respectable, bright sound.  The intro however required a more authentic personality so I combined the built in mic with an LDC set to cardioid pointing at the fretboard more than anything else.  These were each panned a little left and right respectively. Finally a bit of reverb and EQ (including a fairly pronounced notch around 1Khz to allow room for other sounds).

By the time I’d added a simple (mostly block chords) piano line and some drums (via the excellent Neumann DrumMic’a library), we had a nicely recorded version of the initial demo that Lloyd had recorded on his phone.

The drum line started as a block pre-recorded pattern from a different drum library and was then heavily customised by hand in the piano roll to keep it moving throughout. There really is no substitute for thinking

At this stage we knew the track still needed a bump to make it memorable. Listening back to other ideas, Lloyd felt that the tune in the chorus improv could be key to this.

By adding those notes from the chorus improv earlier and a couple of notes from a solo violin library we made the track into something that had a personality right form the start:

The final bits of the puzzle were a cello bass line for much of the track, pizzacato strings for the verse and coda, a few additional solo violin notes and a plucked Hohner Guitaret put through a rotary speaker effect to add some animation to the chorus. This last bit was played by hand and left somewhat un-quantized to keep with the relaxed feel of the track:

The next step is for the vocalist. If you fancy a shot at it, let me know and I’ll send you a guide vocal.

Coming Soon – the vocals ; recording mixing and the finished result. (pinky swear I will write this up when it’s done)

Check out Lloyd’s other tracks and projects: