Following on from Start to finish song production – Primaluce by Lloyd Jenkins this is about another slightly different type of project for a different songwritter.

Scott has his own recording set up and lives bloody miles away, these tracks are ones sent to me to give the tracks a bit of a lift (melodyne, slip editing, etc…) and to create a polished mix.

Scott is a talented song writer and guitarist / bass player and has been working on an album for some time.  I’ve mixed a number of these tracks for him. So far these tracks have just been instrumentals, but he’s been promising to record vocals for a while now and said he’d not done much before.

This is the rough mix he sent over:

In true style he over delivered.
He said:vocal.
I got: multi part harmony in shifting major / minor key. I pretty much knew at that point I was going to end up writing this one up.

Listening to the original I was imediately taken by how well written the track was, but picked up on a few things that I thought could be tweaked to better show off the song. 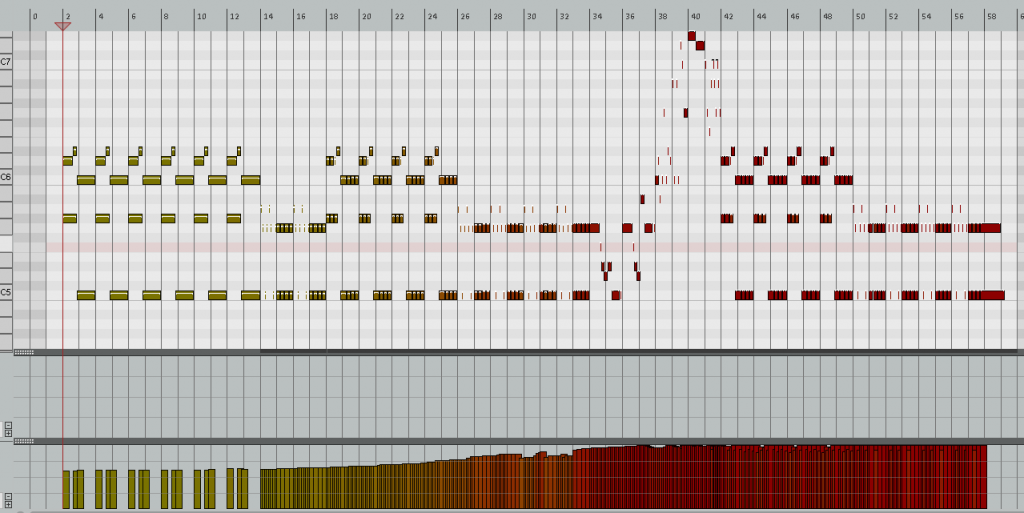 The note lengths, along with the gradual increase in volume told me that this had been written from the piano roll. Nothing wrong with this, I often do that myself for synth parts, but on the piano that was this far forward in the mix it lacked the human touch. To address this I first split the track into two parts perhaps loosely approximating to a left and right hand and then went through each with a view to adding back some entropy.

The issue with the note lengths is a common one, sustain (applied via the pedal) is not the same as holding notes longer. If you look inside a piano you can see how the sustain pedal lifts the dampers from ALL the strings, so even those not struck resonate with the force of neighbouring hammers. It’s a subtle but magical thing which is reproduced well by modern electronic pianos and VSTis if only you send them the right midi information (sustain = cc#64).

To bring back the sustain I wired each midi at a time through my nord stage and then overdubbed just the sustain pedal played manually without quantization. Whilst this actually simulates two performances left then right, it added to the ambience and helped with the humanization.

The results sounded better to me so I kept them, but the intro still sounded like it needed something. So I played it all the old fashioned way.

To the finished recorded and combined piano part, I added +2db of high shelf EQ to make it brighter, a compressor (TDR Kotelnikov) and a couple of reverbs – one Convolution based for the Early reflections and one algorithmic for the nice cleaner more constant tail. Unusually for me, I didn’t put a high pass EQ on it, my reasoning being that there was no bass or kick drum for it to muddle with.

There were 5 vocal tracks. I pulled each of these up in Melodyne studio and tweaked accordingly.

This did not work at all well for the multi part harmonies.

I stepped back and tried something new. I saturated each track a little bit then combined and saturated a little bit more before EQing (high pass plus a -6db notch at  390Hz).

At this point I recalled an audio demo for Voxengo Soniformer which made a barbershop quartet sound like it was performing inside your head. It was a great sound. I wanted that sound. So I set about working out how exactly they had done this. Unfortunately I wasn’t able to find the example again, but from some trial and error I finally got a good result putting Soniformer after a reverb.

Now the harmonies sounding great, but unfortunately the first verse and chorus now sounded weak next to them. I set about ‘doubling’ the first verse by mixing in a couple of copies panned (hard left, hard right), delayed by different amounts (11ms, 13ms respectively) and then pitch shifted (+5 cents, -5 cents, respectively).

I then tucked that back in behind the original at about -9dB in the first chorus (from 0030s until the 2 part harmony started). Subtle but worth it.

Along with the occasional call outs (“Lock the heavy door”) which were simply put through some eq and a mostly wet reverb,  I now had 10 tracks for the vocals:

From here I added a bit more EQ and reverb for the piano (Valhalla DSP’s excellent Vintageverb) .  An overall feed forward compressor (TDR Kotelnikov) and a multiband compressor (IL Maximus) with fairly sparse settings just to get the volume and to bring out some of the highs.

I’m quite happy with the results, let me know what you think: